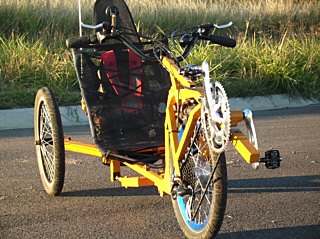 After riding my trike for over 200km I started to wonder if I could improve it further by making some modifications to it. The big thing I started to notice, was that the trike became unstable riding down hills too fast, and after doing some tests, I soon realized that too much if my weight was on the front wheel and not enough was on the back wheels. This was compromising the self centering effect. I also noticed that on a down hill slope if I simply stopped pedaling and pushed back into the seat, that small shift in weight seemed to make a big difference. So after contemplating it for a while I decided I would simply have cut my frame up and re-weld it in a few places in order to lower the seat, raise the seat angle, and most importantly reduce the wheel base, so more of my weight would be on the back wheels, thus increasing the self centering effect. While I was at it I decided I should fix a few other things that had been bothering me. 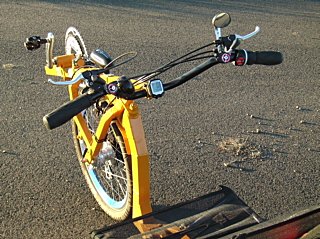 Major frame modifications: The frame was shortened by about 150m at the front. Item 11 has been replaced by new set of pieces that join the steering pivot to the frame at a much more acute angle. 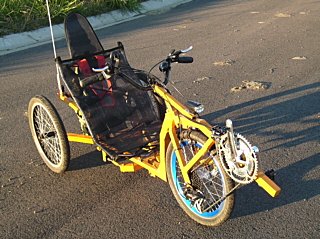 Straightened right stay: In order to move the bottom bracket back and still have enough room to mount my big my 60 tooth chainring, I had to straighten the right stay on the Drive Train. This only just provides enough chain clearance, and in first the chain still chatters against the stay. But you never should cross chainrings anyway, so I guess this is OK. If I did it again I would make the front stay more acute and completely straight. The one on the other side is still the way it was originally was. 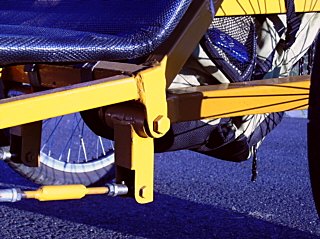 Shortened wheelbase: The wheelbase has been shortened to 1000mm. This has moved the swing arm pivots forward, so they are now directly below the back of the seat. 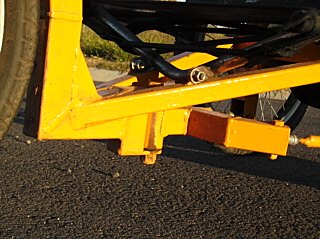 Changed seat mount: The difficulty I have had in getting the self-center to work comes from several trade-offs that I have had to make. To get the strongest effect, the self-center wants the CoG to be right between the rear wheels. However I have discovered that the further away the CoG is from the front wheel, the lower it must get to remain stable, or conversely the higher it needs to be the further forward you go. But if you raise the CoG, the self-center doesn't work, and there is a limit to how low it can be. Neither does the self center effect work if the CoG is too far forward. So finding an optimal place has been a process of trial and error. Nevertheless, moving the seat back, shortening the wheelbase and raising the seat angle have made a big difference. 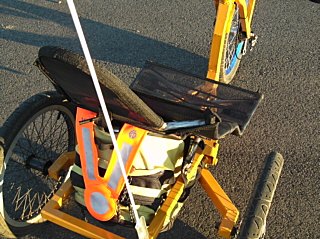 Raised seat angle: Raising the seat angle has made a big difference, not only to stability but also comfort, 21° was just too extreme for me, 30° is just about right, but I am contemplating making a small round neck rest cushion. 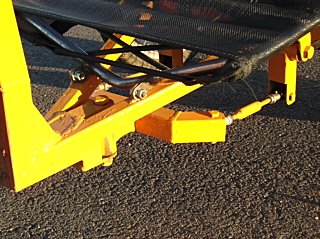 Changed rocker arm angle: The rocker arm angle in now 110°. This has reduced the harshness of the tilt lock, and extended the maximum tilt angle, so that now it is rarely a problem. There is still a maximum speed that you can take a sharp corner, about 28kmh, by it is hard to pedal that fast into a sharp corner anyway. 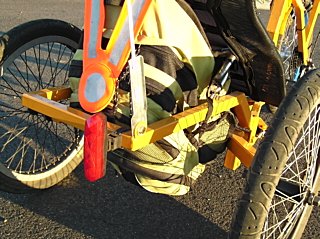 Pannier Mount: I added a square box frame at the rear of the trike to hold a pannier. Originally I was going to make one, but I found that an old backpack of mine fit quite well, so I have been using that for the time being. My original idea was to have a soft duffle bag style pannier with Velcro straps, so you could easily clip it on and off so you could take it with you indoors, rather than having to empty stuff from it. 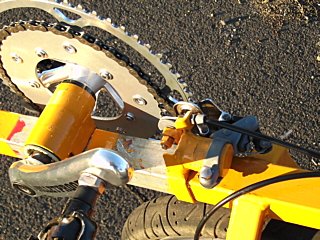 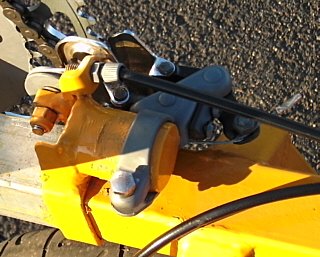 In the above photo you can see a small pulley has been used to invert the cable back around so it pulls in the opposite direction. 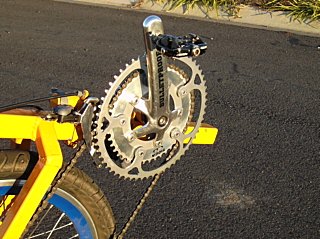 Making Room For a Big Chainring.

Big Chainring: On some downhill slopes I found that I had to stop pedaling, because I started to fish tail due to too high a cadence. This has been fixed by switching back to my 60t chainring. This required the right front stay to be altered to make room for it. 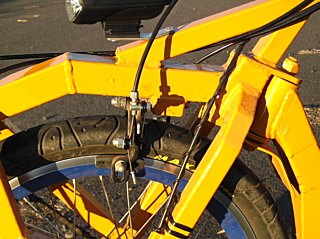 Caliper brake mount: Even though the internal drum brake on my Sachs hub is just great, particularly in wet weather, having just one brake made me nervous. There was no point putting brakes on the rear wheels, because they have so little weight on each of them that they would just skid. So I added an extra caliper rim brake to the front wheel, just as a backup. To do this I welded a short length of box under the rear of the boom to mount the caliper brake on. 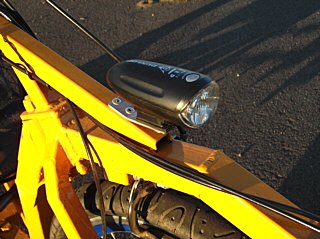 Light Mount: This was a really easy thing to add. Its just a short length of stainless steel, pop riveted to the drive train. I was able to disassemble the light mount and bolt it onto this bracket. Now I just press the release and the light simply slides off the new mount. 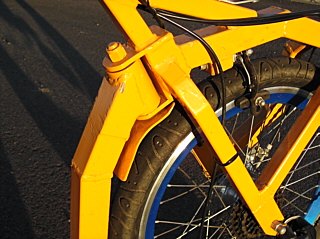 Mud Guard: I added a mud guard to protect the front steering pivot bearing from mud. This is made out of a length of 3mm aluminum. It has worked very well, and after an additional 400km of riding the bearing shows no signs of dirt getting into it, and the action is still smooth as silk. 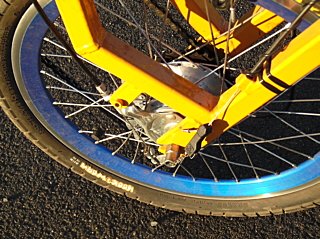 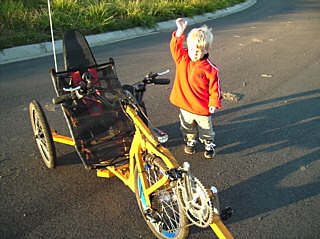 The trike is now pretty well tuned. I can crank up hills in low gear and balance at speeds much slower than I could balance on my mountain bike. I still have to unclip when I come to a stop though. The only other issue -- I have hit the tilt lock on occasion, mostly taking tight corners at full clip. But out on the open road, it hasn't happened yet, and even when it has, it only upsets my turn momentarily, I just have to lean my body a bit harder, to take the corner.

Anyway, from my riding experiences I have been contemplating the new free to caster tadpole design, and really thinking about how one might feel riding it. The time when I am most grateful for the self-center is when I am absolutely stuffed, climbing a hill against a gale. I can drop down to such a low gear that by the time I get to the summit I have my breath back, and am ready to crank it up for the down hill run. I would imagine that under those circumstances on a tilting trike with no self-center where you actively had to hold the control levers to keep it balanced, you might find the experience rather taxing.

So I am going to investigate whether I can find a way to get the self-centering geometry to work with my new design, because despite having control over the tilt, I think you want a tilting trike that returns to center, not one that wants to flop to one side or the other. The last thing you want is the trike to lurch into the path of a passing car, just because you were cranking up a hill, and lifted your hand and wipe the perspiration from your brow.